Twenty years ago, a series of events led me down the path to where I am today, please step with me back in time? June is loaded with tons of awareness days and activities, like HIV long-term survivor day ...

Twenty years ago, a series of events led me down the path to where I am today, please step with me back in time? June is loaded with tons of awareness days and activities, like HIV long-term survivor day,

Caribbean American HIV awareness day, national HIV awareness day, and of course PRIDE Month.
Let’s not forget that the pioneers in the fight and struggles around HIV were mostly members of the
Lesbian, gay, bisexual, and transgender – plus community that took on the task of advocating for HIV
treatment, better care standards, participating in research, educating and outreaching to others about
this illness, bringing it to the forefront with marching, protesting and so many have died to get the
message across – that we all need resources if we are going to fight this disease.

This month, we celebrate the long-term survivors and their contributions to research, education,
treatment, and care that were informed by them. Because without them, America would have lost so
much more. However, ACT-Up, and other groups rallied and lobbied, and called out the injustices that
were present during that time.

Let us look a little further back, all the way back to 1969. Members of the LGBTQ plus community were
regularly targeted by the cops. Well, on June 28, 1969, enough was enough. Cops raided the Stonewall

Inn, a local New York City LGBTQ safe space, but the legendary mothers of Pride had had enough.
Marsha P Johnson and Sylvia Rivera had decided that today was not the day and fought back. There was
a cry throughout the streets “come out come out” and the LGBTQ+ individual took on the cops and
fought back and it was dubbed the stonewall riot.

Pride month has meaning beyond just rainbow flags and a good turn up (party). Pride month is about
activism education, advocacy, honoring those who have given their lives and have paved that way that
we can live free and open and not hide out in the shadows. It is the celebration of who we are and
where we are going, against the backdrop of the struggles and the violence, we have faced as a
community and the fight that must continue legislatively to protect our communities, our families, and
ourselves.

Read more about Marsha P Johnson and Sylvia Rivera in the links below:

Twenty years ago, I held my friend’s hand as he told me that he was living with HIV, and He was kicked
out for being HIV positive and had no place to go. Can you close your eyes and just imagine for a few
seconds – that you told your family that you had HIV and imagine them telling you to take your things
and leave, and that you could not be a part of the family anymore. That feeling that just washed over
you, is what plenty of people living with HIV face every day. It is even harder for people who are LGBTQ+
because many ends up living their life on the DL, instead of living their truth or moving away to larger
cities so they can live their truth. Often that means uprooting from those you love and severing ties to
community and people that you have grown up around but are not able to live their truth without violence or being stigmatized.

Twenty years ago, I received the news that my friend had committed suicide after his family had
disowned him and forbid him from being a part of and seeing his family. And in this moment, twenty
years ago it stirred something deep within me that has fueled the fight and not just sit on the sidelines,
wishing things were better. I choose instead to be a part of the fight, every day, with every breath, in
every way possible until there is an end to HIV.

What started twenty years ago was possible because Marsha P Johnson and Sylvia Rivera stood up and
said enough is enough. Because the LGBTQ+ community and allies – ACT’d Up and in that process, it has
saved my life and countless others.
So, twenty years from now, what will your story be? 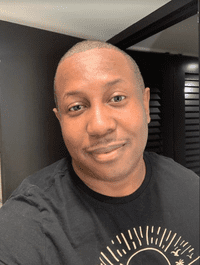 Richardo Jackson has over 20 years of experience addressing social determinants of health and improving health equity.